3 Types Of IP Blocks VPNs Can Help You Bypass 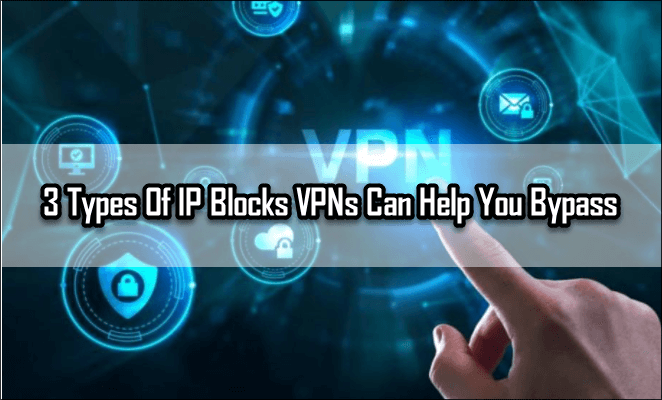 VPN or Virtual Private Network have become universally popular and a must-have for all individuals in this modern world. The tool has become compulsory for internet users as it gives them the chance to bypass geo-restrictions and keeps their information safe and secure. Apart from that, VPN can also encrypt the traffic and gain access to contents across the globe. But there are several platforms, such as Hulu, BBC iPlayer, and Netflix that have the power to detect the presence of VPN connections and will make sure to block it without fail. VPN traffic might get blocked by various other parties as well, which includes nations like China.

Types of IP Blocks you can bypass through VPN

Currently, individuals are looking for a VPN, which is pretty much undetectable. So, the chances of the VPN getting blocked by countries or platforms will be much lower. You can gain more information about these VPNs at internetetsecurite but now, let’s take a look at some of the IP Blocks, which you can easily access through VPNs. Learning more about these blocks will provide you with information on how exactly they can block VPNs. These blocks are:

Rather than looking at the blocking it’s coming from or when it’s headed to, the advanced set of blocking techniques will mainly focus on the nature of the traffic. The traffic for OpenVPN takes the help of SSL. But it comes with unique signatures, which makes it detectable and distinct with the correct set of tools. On the other hand, the Deep Pack Inspection or DPI will look for such signatures and will make no mistake when it comes to blocking the traffic, once they are detected. DPI stands out as one of the biggest elements of China’s Firewall and it’s pretty difficult to circumvent.

The internet traffic is obtained and transferred through the ports. But there are several types of traffic that take the help of certain ports. For instance, the regular HTTP traffic takes the help of TCP port 80 and HTTPS or secure traffic opt for the TCP port 443.

On the other hand, the Open VPN traffic utilizes the UDP port 1194. For such reasons, the firewalls are said to monitor ports like the 1194 and make sure to block all the encrypted traffic, which tries to use it. The method stands out to be pretty simple and easy, so it’s utilized by numerous governments and organizations. It’s not that difficult to circumvent and it’s utilized with other blocking techniques or methods.

Using IP addresses to block and detect VPNs is another blocking technique. When you use a VPN, your actual IP address is replaced with a brand-new one, which you will get from the VPN server. There are many VPNs out there that take the help of shared IP addresses. This means that every individual who is connected through the given server shares the same IP address.[adsense]

The Largest And Best Collection Of Business Sales And Personal Letters

So, if the IP address gets discovered, it will get blocked by the Internet Service Provider or ISP or a website. This type blocking method is often used on platforms, such as Hulu, Netflix, and various other streamline platforms. Countries like China also utilize this blocking technique as a part of their Great Firewall, even though this is not just the only process they use, when it comes to blocking VPNs.

Now, you will not be blocked or stop on your tracks from gaining access to a website from a nation that doesn’t like VPNs. With the help of the best and trusted VPNs, such situations can be well taken care of.

Previous
2 Key Ways To Get Around IP Blocks

Next
3 Reasons Why VPNs Are Now a Household Name