Bitcoin Investments! Why There Is A Decline In Islamic Countries? 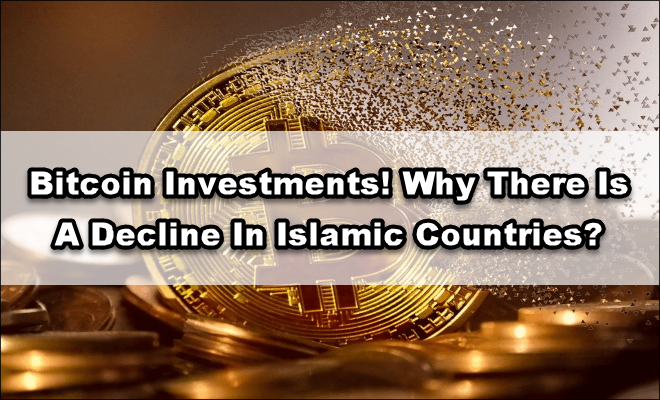 While the creator of Bitcoin, Satoshi Nakamoto, is still unidentified, a sure-fire shot for a Hollywood mystery flick, Bitcoin, on the other hand, swept the world by storm after its release in January 2009. Bitcoin is considered the cryptocurrency champion, with just one coin valuing over $46,000 for most of early 2021.

There is no wonder that the cryptocurrency gets its fair share of on-air time and making the headlines every now then. Despite it being despised by fiat currency institutions, Bitcoin has grown tremendously popular around the world.

According to a recent study by Statista.com, due to events involving Tesla and Coinbase, BTC (Bitcoin) was worth over $60,000 in both February and April 2021. Unlike fiat currency like the US dollar, Bitcoin’s supply is finite and has a maximum limit of 21 million coins.

In light of this information, let’s take a quick look at some of the reasons why Bitcoins and their investors have been on a decline in Islamic countries.

Can be used for Illegal Transactions

Perhaps one of the greatest concerns regarding Bitcoin is that it can be used for illegal activities. However, a Forbes study clearly identifies that most transactions made using Bitcoin are not for illicit purposes. In fact, only a mere 2-3% have ever been reported to have been used to fund or support unlawful actions.

However, several individual studies point out that Bitcoin has indeed been used to carry out criminal activities such as money laundering and ransomware attacks, as in the case of the WannaCry virus. Due to this plus negative publicity, Islamic countries generally have an unfavorable view regarding the use of Bitcoin on their soil.

Muslim scholars hold a wide degree of influence in many Islamic communities. Some have also exhibited a cult-like following in extremely conservative societies where logic-defying statements are revered over common sense and scientific knowledge.

Regardless of the fact, there is still ample dispute amongst the scholars, and due to this, the masses are left hanging, unable to decide whether to support using Bitcoin or completely abandoned them.

In order to combat the onset of cryptocurrency and its rise in popular media, and the increasing penetration of the internet across the globe, Dubai came with its own iteration of sorts. OneGram, a Dubai-based technological firm, has launched its first ever digital currency backed by gold.

Billed as a Sharia-compliant cryptocurrency where each unit is backed by physical gold stored in a vault, this move is an initiative that aims to address speculations and price volatility of cryptocurrencies. There is no doubt that as news of this more Islamic alternative to Bitcoin spreads further, you can pretty much expect many Muslims with buying power to invest or redirect their further investments.

If you look at the global Muslim demographic, there are over 1.8 billion of them. However, you will find only a few that are sincerely interested in buying a Bitcoin or purchasing one in the near future.

Bitcoin is considered more of a luxury, and while the elites may have easy access and pathway to invest in cryptocurrency, the lack of knowledge, awareness, and financial wealth makes the average Muslim aloof of such burdens.

Even though celebrities are trying to propose the use of Bitcoins, there still only a handful of actors currently that have significant holdings of the cryptocurrency.

When you look at the Muslim countries globally, you will find that many of them are still underdeveloped, and while Pakistan is a Nuclear Power, its infrastructure is still far from being adequate.

The most developed countries of the Islamic world are indeed Saudi Arabia and the UAE who have made significant progress in recent years and introduced rapid urbanization and development of technologies by making considerable investments.

Other than that, many Muslim countries are still young towards adopting the internet, and the penetration is considerably low compared to other parts of the world. This is also one reason why Islamic states may lag behind other nations when comparing Bitcoin investments.

The concept of Haram and Halal is very vivid in Islamic communities and Muslim areas of settlements. Haram is essentially the tag given to those that are prohibited in Islam and carry a heavy punishment, let it be a deed or action or even a thing of substance. On the other hand, Halal is on the opposite side of the spectrum and is considered permissible under the guidance of the Holy Doctrines of Islam.

This can be a simple case for a layman to decide whether Bitcoin is simply Haram or Halal, right? Wrong, it gets even more complicated, and with scholars still arguing to this day, the masses are left in the doldrums. In fact, those who don’t want to be part of the fray simply stay away from the subject altogether.

Not Backed By a Real Asset

One of the main proponents that antagonize the use of Bitcoin even more, is the statement that Bitcoin isn’t backed by anything substantial. In fact, one of the biggest issues of Bitcoin’s status as a store of value is that its dependent on its utility as a medium of exchange.

Therefore, Bitcoin is considered part of the cryptocurrency bubble where the value solely depends on the community that has agreed to its use and holds the belief in its store of value. Hence, its value is solely based on its market penetration and the number of people who entrust value to it. Young learners who apply for the best essay writing service should consider and weigh in all of their options when investing in Bitcoin.

Fiat money is basically defined as government-issued money that is not backed by a commodity such as gold. In fact, its value is solely based on the government’s trust, which is why governments request citizens to pay for taxes using fiat money.

Four Easy Methods to Identify the Pure and Impure Honey

Any government doesn’t issue cryptocurrencies such as Bitcoin itself, and this raises the alarm for many Muslim scholars who consider currency should be governed by the ruling authority and backed by the people’s trust in the government. Pupils who opt for dissertation writing services UK need to be aware of such things before investing in Bitcoin.

Not Regulated by a Central Authority

A central authority does not regulate cryptocurrencies, as in the case of fiat money, which is under the supreme control of the government and central banks. Bitcoin is therefore not centralized. In fact, it is decentralized. There is no central storage as Bitcoin’s ledger is distributed and made public. Anyone can store it on their computer.

Not only can any person create a new bitcoin address without the need for approval from a higher authority, in fact, anybody can send a transaction to the network. All of this freedom seems to not sit well with Islamic authorities and Shariah Laws.

Volatility and Suffering for Investors

While many factors drive price fluctuations in Bitcoin, Bitcoin has been historically quite volatile. According to a study by Investopedia, in a three-month span from October 2017 to January 2018, the volatility of Bitcoin prices reached nearly 8%.

This was more than twice the volatility of Bitcoin in the 30-day period ending January 15th, 2020. This is also another reason why Islamic communities don’t want people to participate in the Bitcoin trade since it can cause tremendous suffering for investors on a bad day.

As you can clearly observe, there are several reasons due to which Bitcoin fails to deliver a strong impression in Islamic communities. While some have shown leniency towards the use of cryptocurrency, there is no doubt that the matter very much lies in greater awareness and lack of technology in many Islamic states.[adsense]

Plus, religious leaders who have a considerable following in Islamic communities and their word become an unspoken law for Muslims to abide by no matter what. Hopefully, in the future, with greater exposure and knowledge, things will change for the better. That’s it for now. Cheers and all the best for your future endeavors!

Claudia Jeffrey currently works as the external QA Editorial at Crowd Writer. This is where higher education students can request professionals to write my essay UK to obtain specialized assistance for their subjects and topics from experts. During her free time, she likes to surf the internet for the latest developments in the world of tech.

Previous
What Is the Best Casino to Play At: Try Your Luck at Richprize.com