Is SpaceX’s Starlink a Better Home Internet Than 5G Broadband? 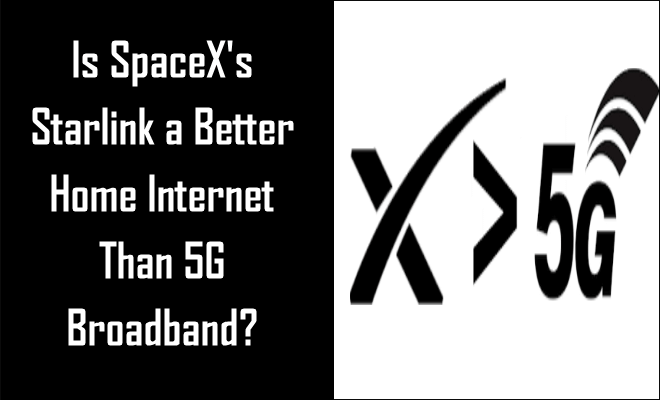 The demand for home internet services is still rapidly rising because of the current pandemic we have right now. 5G broadband and SpaceX’s Starlink is in a head-to-head battle for the best possible home internet service in the United States. Reports show that Americans are both interested in the two services. However, various surveys showed that Americans are more interested in having Starlink instead of 5G broadband for their home internet. Other surveys even show that other people are unsure if they will use either of the two. Now, let’s determine what service will possibly suit you best.

SpaceX is using low-Earth orbit satellite constellations, which can offer lower latency to its users. However, a satellite can only deliver a limited bandwidth for its users. If many users are connected to a single terminal, internet speed will get slower. Starlink critics raised these points as the Federal Communications Commission awarded SpaceX rural broadband funds to a service that has yet to be proven.

According to National Rural Telecommunications Cooperative’s CEO Tim Bryan, he struggles to see how Starlink can provide a steady 100 megabit service to the entire country. However, he believes that it could be successful in other areas.

5G may have a significant advantage over SpaceX’s Starlink when it comes to a reliable service. 5G service works by having a small receiver or transmitter in your place, and then it will send a ping on a 5G antenna located on top of cellular towers. The signal from the infrastructure is sent straight to your home, giving you a wireless connection.

Households located in rural areas may have a better shot with Starlink than 5G. However, the service might be too expensive for them. 5G can offer their services to these areas if telecommunication companies decide to expand their services. However, they will need to build additional towers for the 5G network. Internet service providers are starting to target specific numbers of 5G customers. T-Mobile targets approximately 9-10 million 5G home subscribers by 2024, while Verizon’s 5G Home network did not indicate any targeted number for their limited network.[adsense]

Currently, Starlink is at 10,000 customers. That number is expected to rise as SpaceX started accepting pre-orders for their satellite service. Last August, SpaceX requested FCC’s permission to deploy five million user terminals. However, can they provide enough satellites for their targeted areas?

SpaceX’s Starlink has yet to prove if they will live up to the hype. Major internet providers are failing horribly in providing reliable internet service to underserved areas. There’s no doubt that households in those areas have high hopes for SpaceX’s Starlink. Who knows, it may be one step closer to fixing the digital divide.

Previous
Dell Vs HP Laptops: Which one is the Best Laptop Brand?