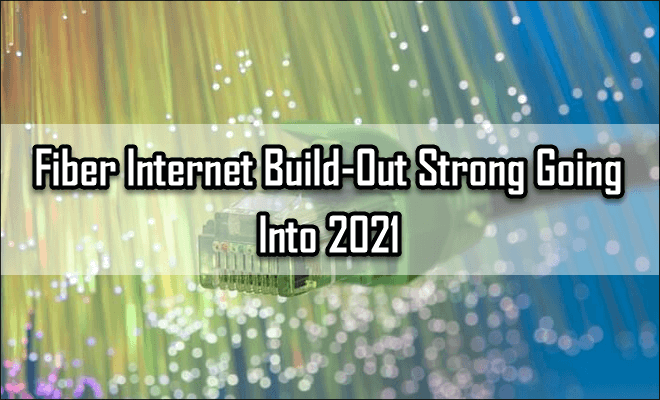 According to the annual study of network operators and consumer research by RVA LLC’s CEO Mike Render, small internet service providers played a vital part in 2020’s fiber growth, which accounted for 88% of capital expenditure. During the year 2020, fiber landed at second place for home availability. Almost 54 million US households are being served by fiber up to this day. However, fiber internet providers are overpowered by cable service providers.

The study shows that various sectors acknowledge how important it is to invest in fiber infrastructures. Render also mentioned that numerous regional and rural telecommunications companies, along with electric utilities, wireless internet service providers, and more, started shifting to fiber rollout. According to the study, internet service providers in tier 2 and tier 3 showed a robust performance last year.

What are these service provider tiers?

Tier 1 – these service providers do not pay for transit service from other networks as they own networks. Internet service providers who belong in Tier 1 solely work with other Tier 1 ISPs through a private settlement-free peering linkage.

Tier 2 – this type of internet service providers purchase transit services from Tier 1 and peers with other Tier 2 networks to deliver internet traffic to the users.

Tier 3 – these ISPs work on a pocket network, and they purchase transit connections from Tier 1 and Tier 2 providers.

Going back to the study, Render presented a graph that showed the first peak of fiber deployment. It happened in 2008 when Verizon started a major build-out. The next peak occurred in 2019 when AT&T accomplished their 12.5 million buildout obligation with the Federal Communications Commission, followed by AT&T and DirecTV merger.

Render also mentioned that fiber deployments decreased last year as major Tier 1 service providers hit their deployment targets, which resulted in the freezing of their infrastructure construction projects. However, he firmly believes that large home fiber investments are on the way. An investment of $2 to $4 million from AT&T will likely happen this year, with high hopes that other internet providers such as CenturyLink and Verizon will do the same.

How Can Video Analytics Help your Conversions?

Other internet service providers are seeing and realizing the advantages of fiber, such as lower operational costs. Internet providers filed for Chapter 11 bankruptcy could be saved if they started deploying fiber from the start, Render stated. He reminded the people that fiber broadband is needed to help with the current demand for reliable internet connections. He also emphasized home internet bandwidth rationing, which promotes unproductivity and extremely long wait times.[adsense]

With the coronavirus pandemic affecting every industry, a significant shift to virtual communication keeps education and businesses going. However, a crazy increase in demand left the internet providers helpless. Fortunately, more providers and other sectors are considering investing in fiber networks. When these providers start a major build-out this 2021, this could provide more households, urban and rural, a reliable internet connection. This year will be filled with exciting trends for the fiber industry. It would also promote healthy competition between the telecommunications companies.

Next
What Are dApps and How They Can Benefit You