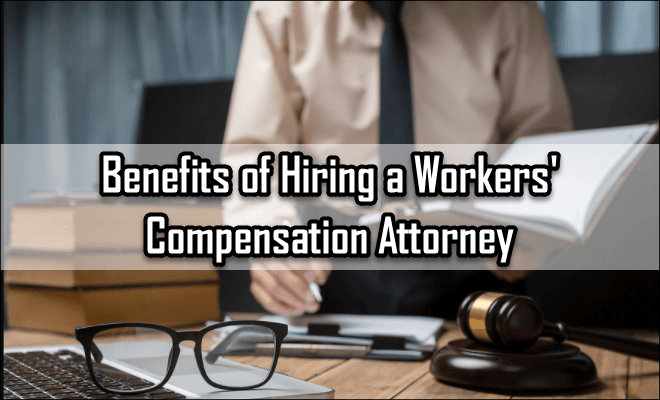 The main job of a worker’s compensation lawyer is to put together medical evidence of injury, taking the depositions of parties such as medical experts and physicians, do legal research, and litigate the case in front of a lawyer or even a referee. So make sure, whether you’re a new or current contractor and business firm, it’s vital you have workers comp insurance in order to protect your business, should a claim ever be made by an employee.

The Benefits of Getting A Workers’ Compensation lawyer

Many people believe that they can easily claim their worker’s compensation since they have always been a great employee and have a clean record at work. Most people even have co-workers that have witnessed the incident that led to an on the job injury. But in spite of all these factors, many people still face issues when it comes to getting workers compensation.

If an individual hires a workers’ compensation lawyer beforehand, then they can easily win the case and get the injured workers his/her compensation. This is because workers compensation lawyers know what evidence to put forward in order to get the claimant a favourable settlement.

They Help You by Improving Negotiations with The Insurance Company

If a worker is representing himself in a workers’ compensation case, then it can be hard dealing with the insurance company. However, this task is a lot easier for a lawyer to handle since lawyers have much more experience in such cases than a normal citizen. Lack of experience with insurance company policies can make it hard for the worker to get any compensation on their own.

An experienced workers’ compensation lawyer will be able to cut the employee some form of a deal and get at least a few benefits at the end of the day. Lawyers are aware of the mind games that many insurance companies can play against you; thus, they’re your best bet at getting what you what.

A good workers compensation lawyer knows the laws and how much benefit you are entitled to. They are aware of every bluff pulled by the other opponents and do not give into pressured deals.

A Workers Compensation Lawyer Ensures That Your Agreement is Worded Correctly

Words play a huge role in how your other payments are influenced. If your settlement is not worded properly, then it could have a negative effect on payments such as social security disability insurance (SSDI).

In some states of America, individuals can receive low SSDI if they are getting a certain amount of compensation. This lower SSDI is known as an offset and occurs when the combination of your SSDI and your monthly workers’ compensation goes above eighty per cent of what you were earning while working at the company.

However, legally speaking, there are many ways to maximize the number of benefits you receive. This is only possible to know if you hire a workers’ compensation lawyer since they know best how to work around the court system. If an individual chooses to represent themselves, then they may not be able to get full compensation for their injury.

A workers’ compensation lawyer makes sure that your agreement does not have any hidden agreements written in it, which can cost you money. If an individual receives a lump-sum payment, then their lawyer can write in the agreement that this payment is to be considered a lifetime payment. This means that your lump-sum amount is to be seen as a monthly payment by authorities, and it can be paid out till you die. This agreement eliminates and reduces the offset effect of SSDI.

Many workers compensation cases are not settled in the conference rooms available in the office. Some of these cases require a trial. This can become time-consuming, expensive, and difficult to handle if an individual has to represent themselves.

Keeping Your Personal And Financial Details Safe At All Times

An individual needs to gather evidence related to witnesses, medical records, file petitions and so on. This is difficult to do if you’re injured or have other responsibilities. Insurance company lawyers try their best to keep you buried under paperwork. This is because they are aware that a normal civilian is unaware of the majority of legal knowledge; thus, they won’t be able to manoeuvre around paperwork easily. Lack of experience and evidence can damage your case. This is why it is better to hire a workers’ compensation lawyer rather than taking on the challenge on your own.

The majority of the time, workers’ compensation cases are extremely complex. Let’s say you got injured on the job and are now seeking workers compensation, but then you find out that someone else, or another company, may have been partially the reason or were the cause of your on-the-job injury. In this case, workers compensation is not the only thing you will seek, but now you have legitimate grounds to sue the third party for negligence.[adsense]

Your workers’ compensation lawyer is the best source of advice you can have, and he/she is the one who will begin the procedure for your case. They are also capable of handling both matters at once since it’s their sole responsibility.

The legal system is extremely tricky to decipher and can be hard for an individual with zero experience to understand it within the span of a few weeks or months. Thus, gaining benefits, such as workers’ compensation, can be a difficult task for them if the company refuses to pay them.

This is where workers’ compensation lawyers come in and take the role of guaranteeing you success in your case. It can be difficult at times, but working individually on the case, along with other responsibilities, would have hindered the end results of your case, and this is why you have support in the legal system to handle all the court proceedings.

Previous
What is VPN blocking and how to get rid of it?

Next
Virtual SIMs: Where should you get one?