What Phone Data Can Police Legally Extract for Evidence? 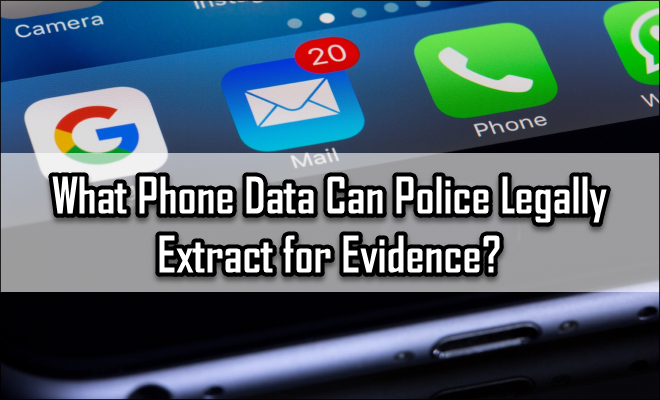 If you’ve been arrested, or are being questioned by the police, it’s likely that they’ll want to take a look through your phone. But what data are the force legally allowed to extract for evidence?

Our phones provide an extensive and detailed insight into our lives. It’s no wonder, then, that the police are keen to search through them to find crucial evidence when someone has been arrested or has been stopped and searched.

But what data can legally be extracted when the police take your phone for evidence? What’s more, under what contexts are they even allowed to look at your phone at all? These are vitally important questions that everybody should know the answers to.

In this post, we’ll be helping to clarify what the police can and can’t do when it comes to looking through your phone. This should hopefully help you to clearly understand your rights if you find yourself in a situation where the police aim to do so.

When Are the Police Legally Allowed to Look Through Your Phone?

The police have the power to stop and question you at any time. However, as you may already know, you aren’t legally obliged to answer any questions if you don’t want to.

You can be searched if the police have ‘reasonable grounds’ to suspect that you’re carrying an illegal object, such as drugs or a weapon. That said, it’s important to remember that, under normal circumstances, they cannot stop you to search your phone without your consent.

There are some very specific exceptions to this. The police have the powers to search your phone without consent if they are able to justify using legal powers such as terrorism or child offence laws.

They may also be able to search the phone without consent if they believe it has been stolen, and their reason for searching you is to confirm that is the case.

What Data are the Police Legally Allowed to Extract?

If you’ve been arrested and your phone has subsequently been confiscated, then the police have the power to extract as much data as possible. Typical data they may look to extract will include messages, contact details, browser history, location data and third-party applications, such as Whatsapp.

It’s also important to remember that the police have specialist forensic investigators on their team. This means they may be able to access ‘hidden data’ such as deleted messages and photos.

Unless the data on your phone is somehow encrypted, the police may be able to bypass your passwords using modern technology.

Can the Police Also Extract Your Social Media Data?

Yes, if you’re suspected of committing an offence, the police may look to obtain data from your social media accounts. Anything that’s posted publicly can be freely viewed, but the police may also be able to access private data.

This could be done after the police seize your phone, or if they directly approach social media companies to request access to your data.

How Long do the Police Keep My Phone for?

If you’re arrested, the police will have the power to seize property that is deemed to be relevant to an investigation, according to Section 22 of the Police and Criminal Evidence Act 1984. Getting any property (such as your phone) back from the police can often prove to be a lengthy and somewhat difficult process.

The police will probably want to hold on to your phone until your case has been concluded, even if you’re yet to be charged with an offence, or if it has been made clear that you’re not guilty.

The Need for Privacy For Your Business’ Future and Brand

On the flip side, if the police do find something on your phone which they want to use for evidence, then they’ll likely want to hold on to it until the conclusion of any trial that takes place. It may not come as a surprise to learn that this can take months, or even years, depending on the circumstances of your case.

Can the Police Also Extract My Data If You’re a Victim?

The police don’t have any powers to take your phone without your permission if you’re a victim. However, they will put in a request if they have reason to believe that the phone or other device contains important evidence that can support any allegations.[adsense]

This subject has created a moral issue, as many victims understandably find it difficult to willingly sacrifice their privacy for the outcome of a case. In 2020, it was reported that the police were extracting excessive amounts of data from victim’s phones, which was leading many rape victims to drop out of prosecutions.

Do You Need Any More Advice Regarding Police Powers to Search Devices?

In this post, we’ve gone through everything you might need to know about the police’s power to search your phone and extract your data. It’s a tricky part of the law that has plenty of loopholes and complications. So, it’s important to know your rights if you ever find yourself in a situation where the police might confiscate one of your devices.

If you’ve got any more questions regarding the police’s powers to extract data from your phone, why not leave them in the comments below?