What if My Employer Retaliates When I File a Workers’ Comp Claim? 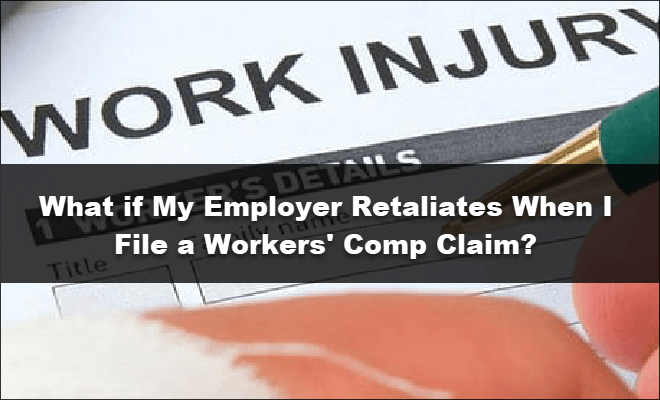 There are thousands of people who suffer injury or illness on the job. These injuries prevent them from working, which affects them in many ways other than simply financially. If you have been injured on the job, under the state workers’ compensation law, you are entitled to compensation for your lost wages and your medical expenses. Your employer is required by law to carry workers’ compensation insurance and to pay on all valid claims; unfortunately, many employers aren’t happy about paying on these claims, because it will cost them in the long run. Although the claim is made against the insurance policy, in most situations, the employer’s premiums will go up. For this reason, it isn’t uncommon for employers to discourage an injured worker from applying for workers’ compensation or they may retaliate against you after you file for compensation. It is important to know that you are protected from these actions, but you may need to take legal action against the employer to ensure your protection.

How Does Workers’ Compensation Work?

Worker’s compensation is a type of insurance that companies pay into. The payments are similar to the premiums that are paid for other types of insurance. The amounts of the payments are typically determined according to the number of employees in the company. If one of the employees gets injured while on the job or suffers an illness as a result of the job, the state pays the compensation from the funds that were collected from the employer. Filing workers’ compensation claims are different from filing a personal injury claim because you don’t have to prove that the injuries were due to someone else’s negligence, you simply have to show that you got hurt or sick while working. The worker’s compensation program just requires you to be a qualified worker when you were injured on the job.

If you have been injured on the job and you utilize your right to workers’ compensation, but after filing your claim you are being unfairly treated while at work or fired from your job, it may be a result of employer retaliation. Under the worker’s compensation law, not only is it your employer’s responsibility to carry insurance but under the Americans with Disabilities Act, your employer must accommodate your disability or injury when you return to work. If they aren’t willing to help you transition back to your employment, they may be breaking the law. Unfortunately, there are a variety of ways an employer may retaliate against you if you have made a worker’s compensation claim, including:

What to do if Your Employer Retaliates Against You

The manner in which you prove these elements depends on the specific state law. For example, some states demand that prove be shown that the only reason for your termination was because you filed a claim, while other states may only ask that you show your claim was the primary reason for termination or another disciplinary action. It’s also important to keep in mind that if your employer can show a legitimate reason why you were terminated outside of filing a claim, it can get them off the hook. However, if the lawsuit is shown to be wrongful termination, it is a different matter, so you must make sure the facts of the situation are on your side. If you do have a case for wrongful termination, you may also get punitive damages and other types of compensation that aren’t available through workers’ compensation. It is critical that you speak with a workers’ compensation lawyer as soon as possible following the termination or other forms of harassment that have occurred to discuss your options.

If you have experienced retaliation from your employer as a result of filing a workers’ compensation claim, the process of taking action can be a difficult and complex process. It is important that you have an experienced and knowledgeable attorney as an advocate when you are pursuing a claim against your employer for retaliation.

Previous
When Do I Need to Change My Will?