Is It Better to Settle a Personal Injury Case or Go to Trial? 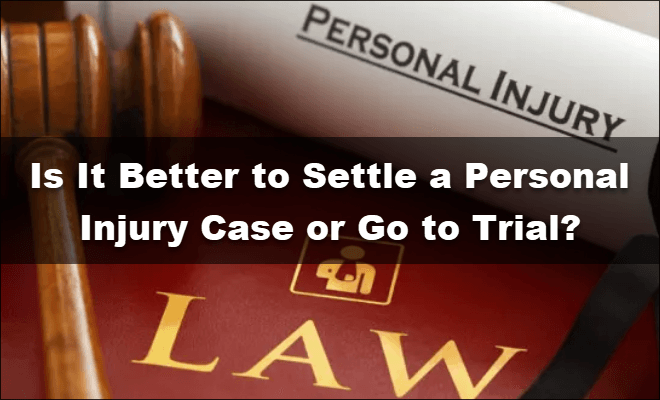 If you’ve suffered a personal injury and want to prove that it was due to someone else’s negligence or wrongdoing, you may be confused about where to start. It can be intimidating to go through a long, drawn-out process of preparing for a trial. Fortunately, it is possible to settle some of these cases out of court. In fact, most people reach a settlement before having to go to trial. There are numerous benefits to doing so.

The main reason parties want to settle their personal injury claims is because there’s an inherent risk to going to trial. Neither party wants to take a chance and end up losing their side of the case. If someone has spent a large amount of money on their medical bills and lost out on wages from having to miss work, they likely want to avoid taking measures that might leave them with nothing or next to nothing.

A plaintiff who is uncertain about their chances of winning a case will go with the option that will secure them some level of compensation. This is especially the case if the individual is currently in debt and needs or wants to begin making payments. Even in settlement proceedings it’s important that the plaintiff has all documentation ready and that they have assistance from a qualified attorney to ensure a greater chance for success.

The defendant’s insurance company will recommend settling out of court for much the same reason. There is a risk that the trial will result in a verdict that the defendant be responsible for compensation that is greatly in excess of the injured party’s damages. This is known as a runaway verdict and it typically happens when there are serious damages. Since insurance companies know how this works and would rather not try to convince a judge to overturn such a verdict, they encourage their customer to go the settlement route.

No lawyer can tell you exactly how much compensation you’d get as a plaintiff or how much you’d likely have to pay (or have your insurer pay) as a defendant. They can provide you with a range that it likely would fall under at the beginning of the process. There usually will be an overlap between what the two parties’ attorneys figure out as the range, which makes it an even better idea to come to an agreement outside of court.

Save Time with a Settlement

The process of filing a legal claim for a personal injury case can take an extremely long time. This is longer, of course, when you opt for a trial. There’s the discovery phase to determine claims and defenses, each side sends questions back and forth and requests documents, there are depositions of the parties and witnesses, and then a court date is made.

With a settlement, the early stages are much the same. However, it should end after getting the documentation and talking to the parties and witnesses. The court is still involved but there’s no getting everyone to show up on a certain date and many of the pressures that go along with that. It can take six months to a year for discovery and then the lawyers talk about the settlement. They may be able to settle this among themselves, but at times they’ll choose to get a neutral third party to conduct mediation. This is crucial if there are too many issues that can’t be agreed upon.

If mediation doesn’t work, the parties still can decide to go to trial. For many cases, it’s best to do this only after exhausting other methods.

After a serious injury, you’re probably already going through not only physical stress, but a great deal of emotional and mental stress as well. A trial can be a messy ordeal and involve a lot more people, time, and energy than you’d like. A competent and compassionate legal team will keep you from having to go to trial to the best of their abilities. At the same time, these professionals will make sure that they’re building a strong case that hopefully will be to your advantage. You shouldn’t have to be physically present while they’re conducting most of this work. You won’t have a ton of attention on you like you would in the court setting. [adsense]

A good personal injury lawyer and their team will support you every step of the way, regardless of what path you choose. They’ll sit down with you to discuss the amounts of your damages and they’ll organize your paperwork, talk with insurance companies, review evidence and circumstances, and negotiate when the other party is ready to settle. Every plaintiff deserves to have experts on their side who are well-versed in personal injury matters.

Previous
How to Turn YouTube Viewers into Subscribers and Leads