How Has Web Connectivity Developed? 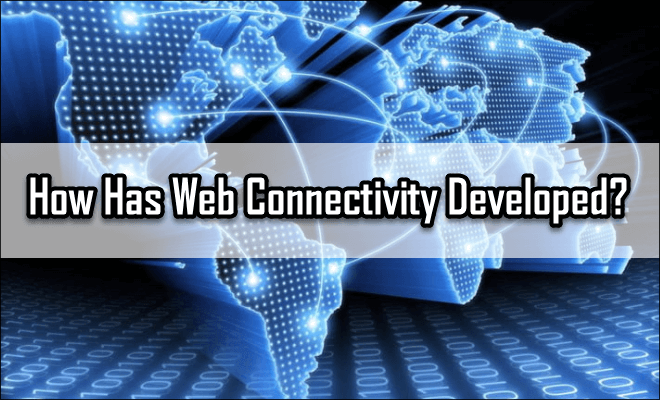 Web connectivity is now a part of our everyday lives, and according to Statista, as of 2021 4.66 billion people have access to the internet and use it regularly. That is around 59.5% of the world’s population.

The other 40.5% mostly reside in developing countries and/or remote areas where the modern age of the internet or telecoms towers (3G/4G/5G) has not yet made it to their neck of the woods. However, in nearly all developed countries it would be safe to say 99.9% of the population has internet access while there are developing countries with fast-growing economies whereby over 90% of the nation has web accessibility.

It is now an important part of commerce and has helped entire countries connect with the rest of the world. If you try to imagine how businesses operated before the internet, everything was quite slow and frustrating, but today communications are super-fast and we even have global internet brands like Amazon and Ebay!

Internet security is now one of the biggest selling businesses online, and rightly so. We are constantly under threat from cyber attacks because we are also willing to allow our data to travel through unknown networks. Luckily, there are plenty of software tools out there that evolve with every new cyber threat. Most notably more people are using VPNs to encrypt their connection and to also hide the content they access.

One of the most notable pieces of software out there that is used for web connectivity is VPN software. You can use this software to bypass IP blocks or look up local search results, live sports or TB streams, and unblock geo restricted content. It is actually quite an interesting subject, and you can find out more about it here at privacyenbescherming.

For many of us, we take web connectivity for granted. It is an everyday part of our lives especially if you live in a city or town. However, as the stats show above, 40.5% of the world still has no internet connectivity and as such no web connectivity.

For most governments, web connectivity is absent in agricultural areas and other primary sector industries because the businesses operating in these areas are in remote locations.

Today, one of the main objectives for governments is to bring web connectivity to all areas of their country. This is mainly because having access to internet comms helps to stimulate commerce, which then gives the government much needed tax revenue and reduces unemployment figures. Both are important contributors to a country’s GDP figures, which determine whether an economy is growing.

Governments or private enterprises can bring web connectivity to a small village in the remote parts of the Amazon via satellite which helps the community connect with supply chain networks to deliver coffee and fruits that enter a global delivery network—in this case web connectivity becomes an important survival mechanism.

As described above, bringing web connectivity to remote locations helps gain access to small primary sector businesses in order to bring raw material/foods into the secondary sector where it will be processed.[adsense]

Consequently, the more people/businesses in the supply chain that are connected to the internet, the more efficient the supply chain is. The speed and efficiency of moving the raw version from the primary sector, through the secondary, and eventually into the tertiary sector speeds up and the costs involved are reduced with less waste.

It is then in the tertiary where the shops and online businesses operate and sell the finished version, which leads us back to the beginning of this article where we explain the ‘Importance of Web Connectivity for Businesses’!

Previous
What is Web Accessibility And Online Marketing?

Next
Betting in Hockey – How to Bet Like a Pro