Bingo calls that I will remember 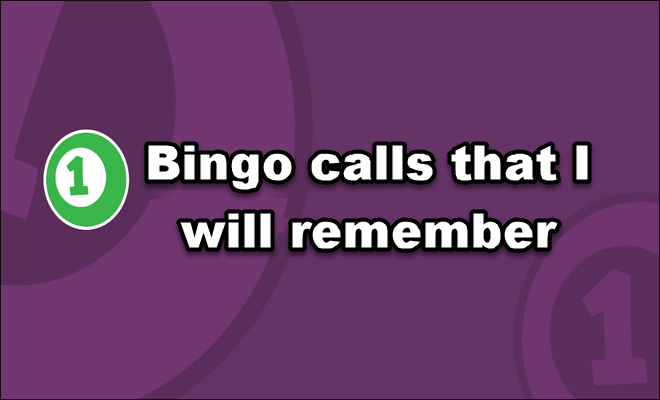 Every bingo number has a nickname. If you are in a traditional bingo hall, the caller will say them out loud and often, if the nickname is catchy, players will shout them back.  Bingo calls are usually a rhyming phrase which stops people from forgetting them easily. Some calls are more memorable than others. Below you can read about bingo calls that you will definitely remember or play at Barbados Bingo.

In a standard bingo game there are 90 balls, and each of the numbers has a different nickname. The calls can be divided into a few categories. Here you can find some examples.

Most of the bingo calls rhyme with the number they announce. Even if you haven’t heard the call before, it is easy to guess which number is being called.

Multiple calls describe the shape of the numbers.

Some calls do not have any meaning and everyone can tell immediately to what number they relate.

In addition to involving rhymes, some calls feature references to culture or history.

• 83 – Time for Tea – drinking tea in the evenings is a popular stereotype foreigners have in mind when they think of British people.

The most memorable calls

The call that is a topic of many debates is the ‘Two Fat Ladies’ as many people find it rude. Some claim it is offensive to those players who are overweight. ‘Two Little Ducks’ is also one of the most memorable calls as it is a very creative and funny. Some of the self-explanatory calls you will remember for sure like the ‘Unlucky for some’ as people often say that number 13 brings bad luck. If you remember that 12 represents ‘One dozen’ it will be easy to remember other calls like ‘Two dozen’ or ‘Three dozen’ that are simply multipliers of the number 12.[adsense]

Some calls are more catchy and memorable than others. If you play bingo on online sites you might also encounter some other calls that are not normally found on the lists of the bingo nicknames. Sometimes you can even hear some dirty or rude nicknames. What calls are being used depends on how creative the caller is. Nevertheless, here you’ve got some examples of the bingo calls you will definitely remember.

Next
Cash for Junk Cars