10 FACEBOOK STATS: WHICH WILL HELP YOU TO LEAD THE MARKET. 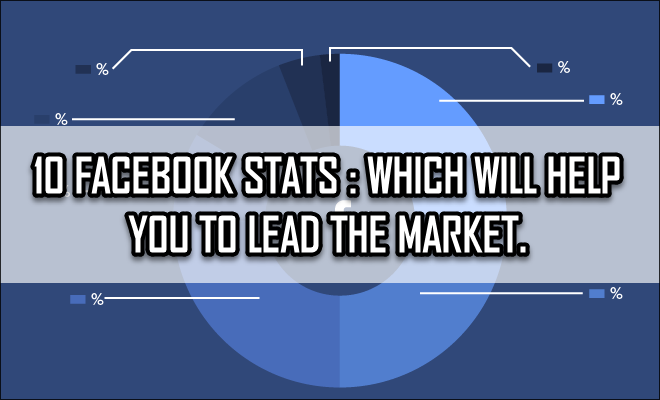 Facebook is the world’s biggest and oldest social media network. It was founded way back in 2004, by Mark Zuckerberg when he was a student at Harvard. While initially limited to the Harvard students, it began to expand to other universities and in 2006, became open to all. Users can upload pictures, tag people, re-share posts, and even message others on Facebook. With the rise of social media marketing, sites like Facebook have become a popular choice for advertisements. The number of Facebook users in the world is so large that advertising on Facebook is a sure-shot way of attracting people to your business.

We have listed a few important Facebook statistics so that you have an idea of how big your potential market is and the best way to market yourself on it. Now let’s get on with the statistics below:

Facebook is the giant in social media networks, which can be seen with its monthly active users touching 2.8 billion this year. It has 1.8 billion people visiting Facebook and another 1 billion using one of the other social media sites that come under the umbrella of Facebook like Instagram and Whatsapp. It has become so huge that any marketer worth his salt wouldn’t dare ignore it.

Facebook is not limited to the US at all, as only 8.9% of users on Facebook belong to the US. It has a network so large that easily a huge population from any country will be on it. For businesses that want to expand worldwide, it is an excellent choice for marketing. It is impossible to leave out Facebook as a potential marketplace for you to expand your business into.

Facebook users spend an average of 34 minutes per day using it. With the launch of the mobile app maximum of the users will be using it to browse on Facebook in their free time. You should use this timeframe to get your business in front of their eyes in a way that it is imprinted to their brain and they want to try it out later.

The arrival of the “Stories” feature on Facebook, has opened more doors to marketing. Over 500 million people check out stories on Facebook every day. Stories have the advantage that they appear on top of the screen and also need less time and effort from people to check them. For those who are struggling to place their business ahead with the changes in the Facebook algorithm, stories might be a way in which they can wield the power of Facebook.

Over 1.3 billion people use Facebook Messenger. It can be a great way for businesses to communicate with their clients and clear any doubts they may have. It is also a great way to get updates and reviews from the client once the order or service is delivered. By communicating and collecting testimonials, you can build a base of trust for your business in the market.

18.3% of users in the US have reportedly purchased through Facebook. This is far more than on Instagram or Pinterest. Now you know how much Facebook still influences people in matters of product purchasing. It is fair to say that Facebook has had a wonderful growth of audience over the years who trust the site, making it a good place for you to display your business on it.

A whopping 200 million small businesses use Facebook for their advertising needs. Businesses can create their profile and provide contact information, link to their website, which can generate any business a huge amount of traffic. Consumers can post queries on Facebook pages, making customer service easy and effective for both parties.

Facebook might be the oldest popular social media platform, but it is still very relevant to most youngsters today. According to Statista, 65% of users on Facebook are below 35. This should give you an idea of whether your target audience will be on Facebook and it also makes you aware of how your advertising should be to target a certain audience.

2/3rd of the users of Facebook visit or follow a business page. Large businesses are already using Facebook to market their brand but local businesses can greatly benefit from this platform too as it ties them closer to their community. With the pandemic, more people are willing to support local and small businesses making it a good time for you to get online.

Many businesses are already on Facebook making full use of everything the platform has to offer. 78% of consumers in America have said they discovered products via Facebook. This means that a lot of them have been using it to actively discover products and others have found it in their feed making it an important discovery platform.[adsense]

Facebook is the first largest social media network to hit the public. There have been some sites before it, but most of them are obsolete now. Due to it being around for a long time, the users are from different age groups. I mean don’t you remember helping your parents and grandparents to set up their account? This gives Facebook power in the social media world as most of them cater to just today’s youth. If your target audience is older or your product is something that can be useful for every age, you might want to consider Facebook as a marketing tool for your brand. It could be just the thing that can take your business to new heights. Now that you have become aware of all that Facebook has to offer, we won’t keep you any further from figuring out your social media strategy.

Next
Hootsuite Vs. Buffer: Which One is best for Social Media Marketing?